It’s useful to have a few geologic concepts in mind when looking at the rocks around the tidepools of Cabrillo:

Sedimentary rocks are made up of material (most often bits of other rocks, called clasts, or shells) that accumulates on the seafloor, on a riverbed, at the bottom of a lake, etc. Layers of sediment (strata) are deposited – as you might expect – one on top of another, and are initially pretty much horizontal.

Geologic time (see Figure 1). A stratigraphic column is a diagram showing what you would see if you stacked all the rocks in an area on top of one another, from oldest at the bottom to youngest at the top. The term formation refers to a set of rocks, all of the same age and of similar or associated rock types. Figure 2 shows a stratigraphic column for the San Diego area.

The oldest rocks here are the thin strata of mudstone and sandstone that make up the bottom of the cliffs and the floor of the tidepools. These are the top (that is, the youngest rocks) of the Point Loma Formation. The layers contain burrows and other trace fossils of ancient marine organisms. People have also found fossil ammonites (similar to the modern-day chambered nautilus) and the remains of a mosasaur, an extinct marine reptile, in this same formation, though not necessarily here. These rocks are about 70 million years old.

On top of the Point Loma mudstones is a layer of gravel and boulders. These are the oldest rocks of the Cabrillo Formation. Many of the boulders are a dark greenish black rock; these were originally volcanic rocks of Jurassic age (about 150 million years ago). There are outcrops of them in their more or less original form near Lake Hodges. Chunks of those volcanic rocks were eroded out of their original resting places and transported to the seafloor where they were deposited. There must have been a very strong current to carry such big chunks of rock. The sandstone layer on top of the boulders suggests relatively quieter waters.

About 77 million years ago, the land where Cabrillo National Monument is would have been at the bottom of the sea. The Point Loma Formation of sandstones and mudstones were deposited toward the outer edge – the “toe”- of a feature called a submarine fan. Submarine fans are essentially the result of giant undersea landslides, in which sediment is transported from the continental shelf by density-driven currents. Smaller particles, like those in the mudstones, are transported further out to sea than are the larger ones.

As time passed, successive landslides built the fan both upward and further out to sea. This process is responsible for the boulders and gravel at the bottom of the Cabrillo Formation.

At some point during the latest Cretaceous – close to 70 million years ago – activity along faults somewhere east of Cabrillo dropped the seafloor relative to the continental shelf. In short, the ocean in which the Cabrillo Formation was accumulating got deeper. This relative depth change is reflected in the change from gravel and boulders at the base of the Cabrillo Formation to sand-sized particles above.

The fault motion at the end of the Cretaceous was probably related to the process of subduction, the collision of a section of seafloor (a plate of oceanic lithosphere, to geologists) with the edge of a continent. This process is going on right now in the Pacific Northwest and is responsible for making the Cascade volcanoes and lots of earthquakes. Around 28 million years ago, subduction here began to slide northwest relative to the North American plate (along what became the San Andreas fault system). This so-called strike-skip motion is to blame for many of California’s earthquakes these days. A bend in one local fault, the Rose Canyon fault, made the rocks around it buckle and fold. This uplifted Mount Soledad and downwarped Mission Bay; it may also be responsible for the present-day tilt of the strata at Cabrillo.

Abbott, P.L. 1999. The Rise and Fall of San Diego. San Diego: Sunbelt Publications. 231 p. An excellent self-contained introduction to the geology of the San Diego area by a professor at SDSU (Pat Abbott is often on local TV after geologic events).

The latest edition of a very nice introductory geology text. Exciting photos and diagrams. This is a good thing to read if you want to know a bit more about the how and why of geology. 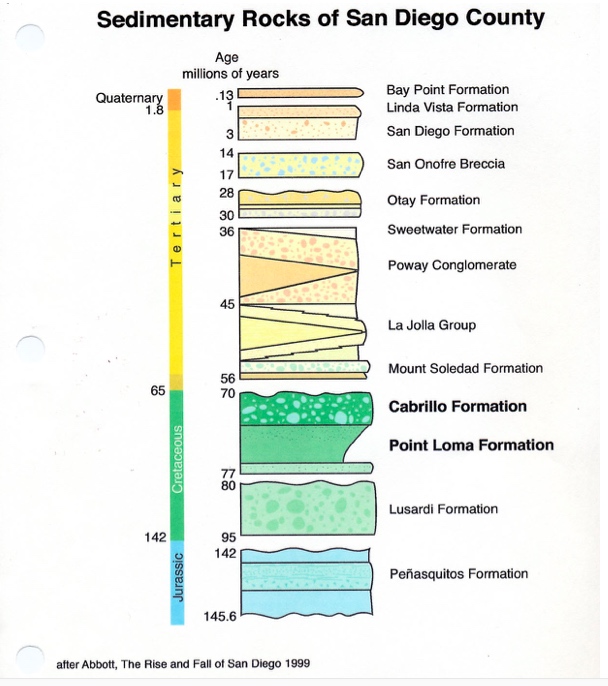