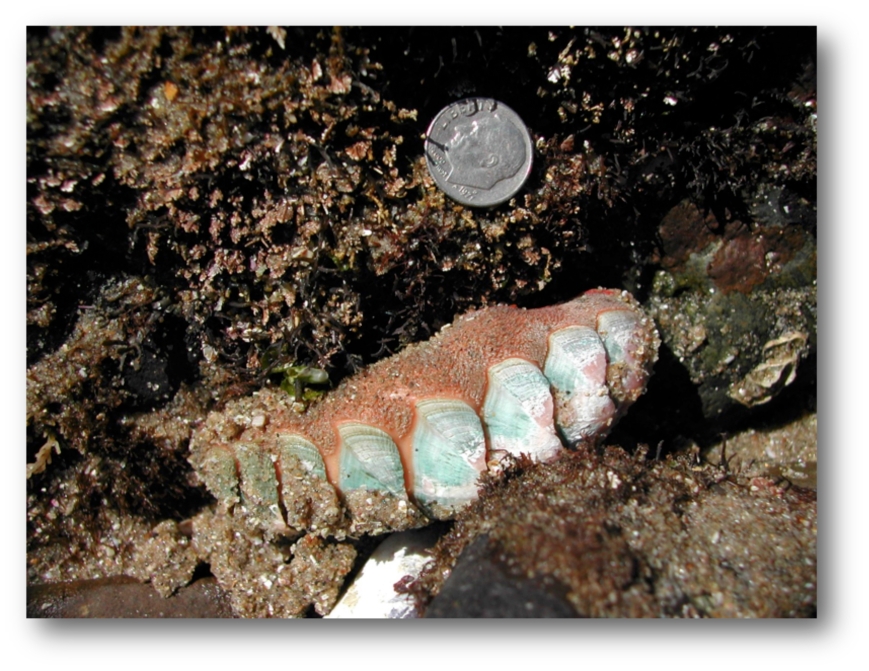 Chitons are flat, elongated molluscs with a broad foot and eight overlapping, dorsal shell plates. The mantle forms a thick girdle that either borders or covers the shell plates. The girdle may be smooth or have scales, bristles, or calcareous spicules. Without eyes or tentacles, the head is indistinct. Chitons are generally dull shades of red, brown, yellow, or green, 3 mm to 40 cm (0.12–15.7 in.). Most species average 3 to 12 cm (1.18–4.72 in.). The largest chiton at Cabrillo is the Conspicuous Chiton. The largest chiton is the Gumboot Chiton, Cryptochiton stellari, but it does not occur as far south as Cabrillo. It’s a Pacific Northwest species that can be as big as a football.

Locomotion: The broad, muscular foot is used for adhesion and locomotion. Chitons can creep very slowly by muscular waves in the foot, the same way as snails. If dislodged, chitons have the ability to roll up into a ball.

Diet: Fine algae and small organisms
Feeding: Food is scraped from the surface of rocks and shells with a radula.

Respiration: Six to 88 pairs of bipectinate gills are used for gas exchange. The number of gills varies among species and within a species depending on size.

“The chitons, sometimes called sea cradles, are molluscs with an eight-part calcareous shell that is embedded in a leathery skin known as the girdle. Using a broad flattened foot that acts as a large suction disk, they attach themselves firmly to rocks. Their gills are set in a deep groove that lies on both sides of the foot and their anus is near the posterior end. A chiton’s head lacks eyes and tentacles, but it does have a mouth that is equipped with rows of chitinous teeth on a long radula. The chitons use their radula to rasp plant material from rocks and to browse on bits of seaweed.” Jeffrey L. Brandon & Frank J. Rokop, Life Between The Tides: The Natural History of the Common Seashore Life of Southern California (American Southwest Publishing Company of San Diego, 1985), 50. ===============================================================

“In California, we are fortunate to have a large diversity of chiton species. The mossy chiton, Mopalia muscosa, Nuttall’s chiton, Nuttallina fluxa and Hartweg’s chiton, Cyanoplax hartwegii are easily found in tidepools because they remain on exposed rocks, but they are generally dark green to dark gray in color. More colorful specimens like the white, pink and green conspicuous chiton, Stenoplax conspicua, and the mustard yellow Lepidozona pectinulata will only reveal their beauty by the careful turning of large stones that are submerged in knee-deep water. Keep’s chiton, Cyanoplax keepiana, has brilliant blue markings on its plates that can only be appreciated with a hand lens and only after finding them under small stones that are partially buried in gravel. (Always return all rocks and specimens exactly where you found them).