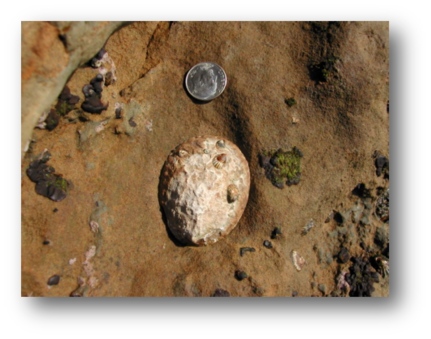 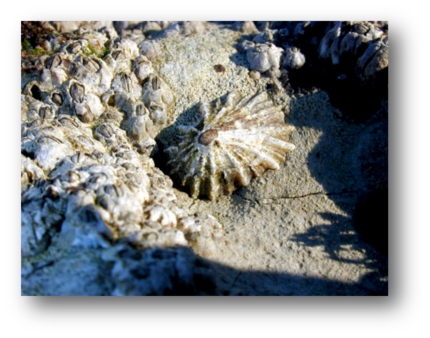 Where found:  On rocks in different zones of the intertidal, depending on the species. Lottia digitalis and C. scabra are either solitary or in aggregates in surf areas, extending to the splash line in shaded areas and down into the middle zone. They often compete, although C. scabra tends to be found on gently sloping surfaces, while L. digitalis prefers more vertical surfaces. Lottia gigantea (Giant Owl Limpet) are found in the high intertidal, although larger specimens have been found in the middle intertidal.

Interesting facts: The height of a limpet’s shell (relative to other individuals of the same species) is sometimes associated with its position in the intertidal zone (taller shells are found higher on shore). Although they look as motionless as a barnacle at low tide, these animals are quite mobile. They can cruise around looking for food, avoiding predators, defending their territory, seasonally migrating, or reacting to environmental disturbances. This animal is a good example of how our perceptions of intertidal life are shaped by the fact that we visit them during daytime low tides. See “food” and “life history” sections for more details. An owl limpet is considered a delicacy in some cultures. Each animal is prepared as a single, silver-dollar-sized fried steak. For this reason, Owl limpets are subject to population pressures due to harvesting. Although (as of 1984) American law does not regulate these animals specifically, there is a 35 invertebrate per day limit in California.

Adaptations:  Limpets use their “feet” to plaster themselves very tightly against rocks. According to BPT, once the foot has taken hold of a rock, it takes 70 pounds of force to remove a limpet with an area of 1 square inch. This protects them from desiccation as well as predators.

Food: Although limpets look motionless, they actually cruise around looking for food and fleeing predators. Some limpets stay motionless during daylight hours, others will move as long as they are immersed in water. At night, the animal uses its foot to lift the shell from the rock and actively moves. Limpets are grazers, eating algae that it scrapes off the rocks with its radula. When the tide rises, aggregations of Lottia digitalis disperse in search of food. They re-form at low tide, although not exactly with the same members or in the same place. During low tide, Owl limpets occupy a “home scar” that the animal fits perfectly into. Around the home scar is the limpet’s territory (about 1000 square centimeters), which is covered in an algal film. Lottia defend their territory against intruders, who usually know to avoid them. During the rising tide, the Lottia will graze its algal film in the shape of a figure eight. When the tide subsides, they will return to their home scar. Individual Lottia have been known to invade other Lottia home territories.

Life History:  Males and females are separate, with fertilization occurring at sea. Lottia digitalis will spawn in winter, spring, and summer, although recruitment is highest in the spring and fall. When young they are found lower in the intertidal. Throughout their lives they migrate upwards in fall and winter, possibly in response to increasing waves, and migrate down in spring, but not to their original position. Therefore, as they age, their net motion is upshore. Owl limpets change sex from male to female as they grow. Therefore, larger individuals tend to be females, which are also the first to be harvested, leaving a population of smaller males that are unable to reproduce and replenish the population. 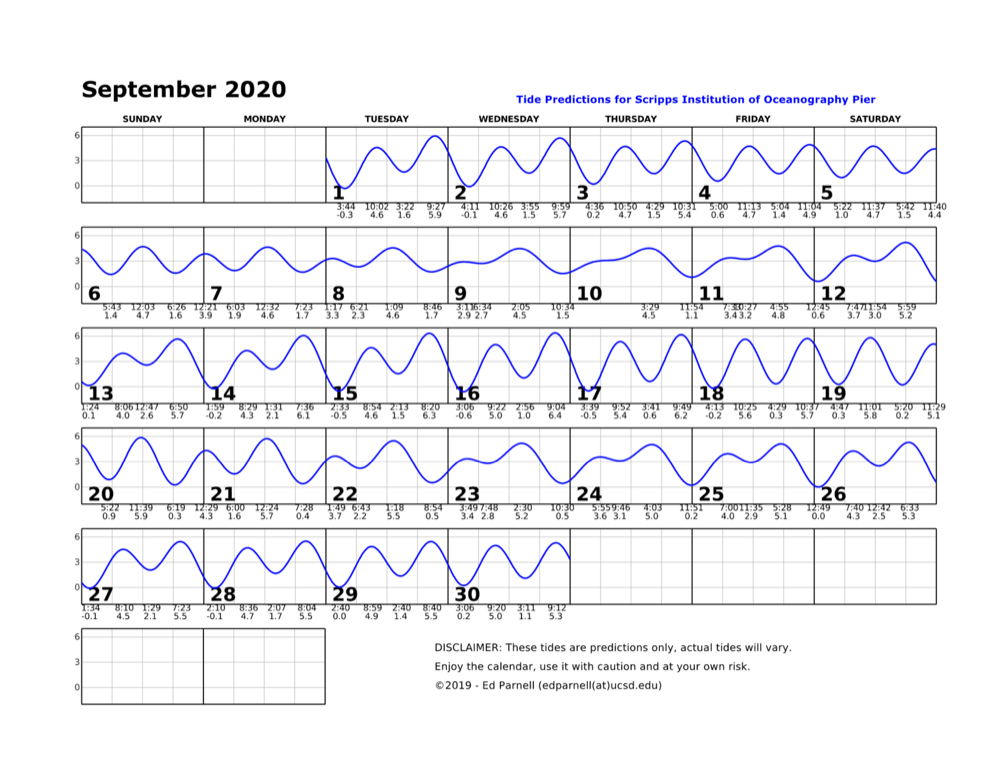