Last month I had the rare opportunity to take a hike down the eastern side of the Point Loma peninsula, from the US Navy sub base, along the bluffs and onto Cabrillo National Monument. I took this traverse with Engineering Geologist Mike Hart and two civilian environmental employees of the US Navy. We were fortunate that Mike had a connection to the commanding officer and we were allowed to go accompanied, having made a formal request. Ranger Keith Lombardo was also involved in getting us permission.

Though this is the side of the peninsula we see every day from our fine city, a beautiful profile along the water, it is not the easiest place to get to. You can’t just walk south through Zone 3 on the west side and then eastward around the point. From that direction there is an increasing amount of boulder and riprap that makes the journey a very tough scramble. And there would have to be at very low tide. You can’t land there from a boat because the National Park Service and the United States Navy forbid it. And, of course, you can’t just pull onto the Navy’s sub base, park your car and stroll on down the peninsula. This behavior would initiate a “response”– the kind of response you don’t want. I have heard from Keith Lombardo that you can scramble down the eastward draining canyons from up above but the canyons are heavily vegetated and you may need to use a rope or two. So the trip for me was special and rare.

The purpose of our trip was to look at the bluffs for evidence of faulting or large-scale land sliding and was a follow up to some research we’ve been doing since discovery of the “new fault” up in the southwest parking lot near the historic US Army radio shack.

It was a beautiful and bright day with a -1.26 tide, which created a wide “beach” though there was not much sand. The beach was mostly a cobble beach. There is no real good source of sand to be deposited on the cobbles to form a sandy beach. Just to remind one and all, sand comes from rivers. If there is no river sediment then there is no sand to form a beach. The San Diego River, chock full of sediment from all its travels, used to have an outlet to San Diego Bay, but the last connection (channel) was closed off during the development of San Diego Bay and Mission Bay decades ago. So there is very little sand in the water that could be deposited on the east side of the Point Loma Peninsula. More sand was apparent to the south but this is sand that may have entered the Bay mouth or sand that moves on shore and offshore seasonally from submarine sand bars in the Bay.

The bluffs along the beach are spectacular! They are high and very steep. They are composed of the Cretaceous Cabrillo Formation rocks, which, on the familiar west side of the peninsula, are well exposed along the road cut down to the tidepools but not exposed at the beach. The underlying, multi-layered Point Loma Formation we see on the west, so well exposed at the tidepools, is not exposed on the east side of the peninsula because the rocks are tilted to the east, so they are buried below the water – they dip downwards to the east below the water so you can’t see them.

On top of the Cabrillo formation is a marine terrace (a level platform) cut into the older formational rocks by waves when the sea level was higher. A separate, younger geologic formation has been deposited on top of the marine terrace. The formation has different names but has traditionally been referred to as the Pleistocene Bay Point Formation. This is the same reddish unit we see above the multi-layered Point Loma Formation on the west side above our tidepools.

Along the base of the bluffs are piles of rocks from older and newer rock falls – this is to be expected from such steep bluffs. I took pictures of many of these. Also, from where do you think all the cobbles on the beach come? Up above!

The Cabrillo Formation represents the middle part of the great submarine fan delta that existed off our coast 65 million years ago. Remember we have a small slice, a very small slice, of that ancient submarine fan that forms our peninsula and our jewel of a National Park – a slice through the layers of the ancient earth that reveals much. A primeval river (gone now) deposited huge piles of sediment onto the Cretaceous ocean, which formed the submarine fan.

The middle part of the fan (a submarine fan’s deposits are usually described by geologists as “inner, middle or outer”) represents the coarser, heavier sediment particles – sand, gravel, cobbles and boulders – that dropped out of the current soon after being dumped in the ocean. The outer fan deposits are the lighter materials, like silt and clay, which floated in the water, more or less, and moved farther offshore before being deposited. The sediments flowed downhill, just like they would have above the water on the land surface, through multiple submarine channels. These channels were filling up and being recut and crisscrossing to form an elaborate braided pattern. You can see these old channels in the bluffs along the east side – big layers of cobble and gravel and huge boulders.

Many of the pictures show these huge piles of cobbles and huge boulders. While the fan was active, and forming, the channels actually carved through other freshly deposited sediments and ripped up pieces of these materials, re-depositing them farther down the fan slope. You can see these “rip-up clasts” (“clast” is a geology word for “particle,” from sand to boulder size – a good Scrabble word) in the east side bluffs. They are rounded from erosion – the abrasion that comes from rolling downhill through rocks. Look for the pictures of large gray cobbles and boulders with light gray “shattered” looking material inside them.

Another readily apparent feature of the bluffs is the notch at the bottom. This notch becomes more apparent as you proceed to the south, closer to the channel mouth and the ocean (you can see this in a number of photos). This is called the “wave-cut notch,” of course. It’s a very distinctive feature. The beach along the east side is not very wide in some places and wave energy, even though it’s not big ocean wave energy, attacks the base of the bluff. Sea caves can also form where fractures exist, which erode more readily and farther into the bluff. Sometimes this notch gets preserved in ancient sea bluffs where there is now no ocean or big lake. What’s remarkable about “wave-cut notches” is that in some places on our peninsula you can see ancient notches higher in the rocks. Divers have actually found wave-cut notches under the water offshore (cut when the sea level was lower). Other National Parks, like Death Valley, which was occupied by the huge 600-foot deep glacial Lake Manly during the Pleistocene, have preserved ancient shorelines high up on the sides of the bounding mountain ranges. Look for them. They are dead level lines, which ring the valley like a bathtub ring. We have our modern one prominently displayed along this stretch of the coast in our Monument.

There are some very apparent ancient faults exposed in the bluffs. See if you can identify them in the photos. One is very easy to see. It shows a big pile of gravel and cobble –called “conglomerate” by geologists – on the right, juxtaposed next to a big pile of sand (sandstone) on the left. The vertical line between them is the fault and if you look at it closely you can see fine-grained, ground-up material that forms the vertical line. This is called fault “gouge.”

See if you can recognize a fault in the picture of the “bumped out” bluff with the small tree at the top and two of us standing below. Look for the offset layers of gravel that would define the fault.

Note the stream mouths, which are carved through the bluffs. They are steep sided and characteristically “V-shaped.” As you know, water always flows downhill and can, over time, carve–erode–the earth very deeply. (See “the “Grand Canyon” – a relatively young feature believe it or not).

Look at the tops of the bluffs where you can see the soil profile, which has developed on the top of the rocks, like a rind. Soils form as rocks “weather” – degrade chemically and mechanically over time (thousands of years) – with the help of organic materials and chemicals, e.g. plants, bacteria, worms and other organisms. You can see a slice through these soils at the bluff tops. Some pictures also show white, gravel-size materials in these soils or at the tops of the gullies, which our guides – two environmental consultants who work for the Navy – indicated are most likely “midden” materials from old Native American sites. Where we see shells in a soil profile they can be the refuse from older campsites where the clams and snails were eaten and the shells discarded. These are sometimes referred to as “kitchen middens”.

The collection of apparent tidal organisms is different, as you would expect, on this side of the peninsula where the wave energy is much lower. Many large boulders display big colonies of Phragmatapoma – sand castle worms – much bigger than we see on the west. There also were places where the gastropod Tegula covered the intertidal in epic numbers. I don’t know if this is normal or not. There is also a picture of a bright red sponge – I don’t know the species – mantling a brown algae leaf. 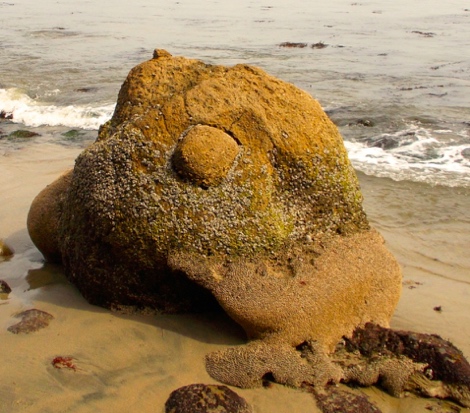 We also saw a few harbor seals, Phoca vitulina, on this, the “harbor” side of the peninsula. They were sunning themselves on top of large boulders.

There are two historic brass plaques near the parking lot on the Navy base where we started and ended our journey: one documents the former Ballast Point Whaling Station, which was a “try works” where dead whales were brought to be rendered into oil in the 1850s and 1860s, and on into the 1870s until the Army acquired the property as Fort Rosecrans. Another plaque documents Fort Guijarros, which was a Spanish fort built before 1800 and which was involved in the “Battle of San Diego Bay” in 1803. Both plaques were placed with the help of the “Squibob Chapter of E. Clampus Vitus” amongst others. 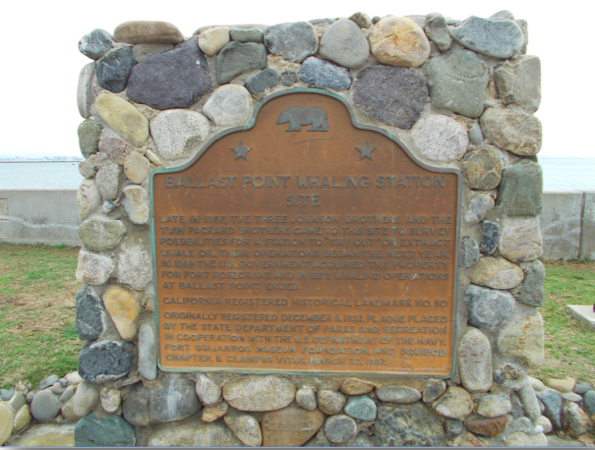 I hope you enjoy the photos. If you read this and have any questions let me know and I’ll try to answer. It was a privilege to get on that side of our park and see what there is to see. I look forward to getting back!