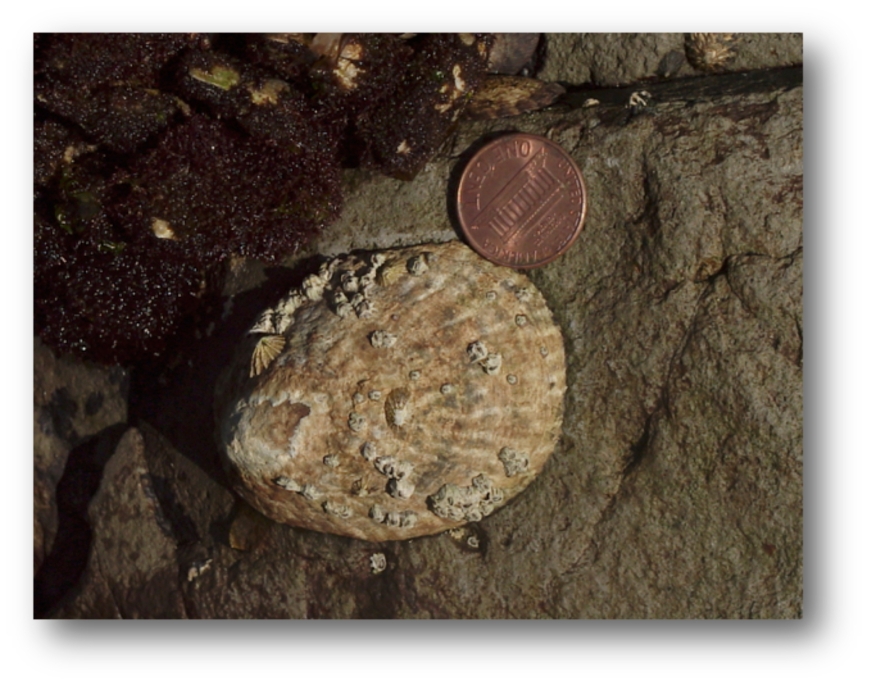 Where to find them: The owl limpet is found on the Pacific coast of North America from northern California to southern Baja California.

What’s their life like: It is most abundant in California and favors vertical rock faces in wave-swept areas in the upper littoral zone. It grows slowly and may live for up to 20 years. It browses on microalgae growing on rock surfaces.

The owl limpet is a territorial species and some individuals return to the same specific location every time the tide goes out. The limpet’s contours grow to fit the rock surface tightly.

What do they eat: grazes at night, or when the tide is in, on sea lettuce and other algae.

What eats them: the Black Oystercatcher (a bird) is the main predator. When they’re little, it’s possible that lots of other things could eat them, such as gulls. There may also be other mammal predators we simply don’t see much of at Cabrillo. As the limpets get bigger, they become safe from more and more predators. We call this a size refuge. It is certainly reasonable to think at smaller sizes stars could prey on them lower down when the tide is in. Mexicanthina might also prey on smaller individuals.

Reproduction: Owl limpets are protandric hermaphrodites. They spend about two years as juveniles before starting their reproductive lives as male limpets. If they survive long enough, some of them later transform into females.

Interesting Facts: These limpets will return to a “home spot” called a scar after their feeding when the tide is in and at night.

They can live for 20 years. Their name comes from the muscle scar created on the inside of the shell which resembles an owl head.

Large female limpets graze on the film of algae growing on rocks and defend their territory against other owl limpets, mobile gastropods, mussels, sea anemones, barnacles and macroalgae. They dislodge large competitors by pushing them away with the anterior part of the shell, and if barnacles settle, they are rasped away with the radula.

The Natural History of the Common Seashore Life of Southern California
by Jeffrey L. Brandon and Frank J. Rokop

The Plight of the Owl Limpet

The tidepools at Cabrillo National Monument are currently being studied to assess the impact human visitors have on them. Initial results seem to indicate that humans are contributing substantially to the decline of many species. The National Park Service, however, believes that we are capable of resolving the problems that face the intertidal animal and plant life so that we may, hopefully, undo some of the damage and help these species survive.

For example, consider the plight of the owl limpet…

Owl limpets are still fairly common on the rocks of Cabrillo’s tidepools. But so too were abalone at one time. Then people discovered how good abalone tastes and the abalone began disappearing. Now it is nearly impossible to find even a small abalone at Cabrillo. Like the abalone before them, owl limpets today may be in danger of disappearing simply because they taste good.

In the 1970s, owl limpets that lived in Cabrillo’s tidepools were abundant and averaged 50.25mm across in size. Meanwhile, only four miles up the coast at Sunset Cliffs, owl limpets at that time averaged only 30.61mm. The older, larger owl limpets at Sunset Cliffs were apparently being gathered for human consumption. At Cabrillo National Monument, however, no collecting of any kind is allowed, so the animals are able to grow older and bigger.

Here is a curious and worrisome twist: owl limpets are hermaphroditic – in other words, they are both male and female during their life span. They are male when they are young (and small), and female when they get older (and larger). This is important because it may be that owl limpets are not growing large enough to fulfill the female role of reproduction at Sunset Cliffs. At Cabrillo, however, the tidepools are closely monitored and owl limpets are able to grow to a large, female, size.

It is possible that protected areas like Cabrillo’s tidepools serve an important function as breeding grounds for owl limpets and other commercially important species in the area. Most limpets hatch from eggs into a larval form that drifts with the ocean’s currents to their eventual homes. Perhaps many owl limpets that spawn (hatch) at Cabrillo are swimming away and replenishing other areas of the coastline with young owl limpets. If this is the case, then it is very important that we protect and preserve areas like the Cabrillo tidepools.

A recent study, however, suggests that even the Cabrillo owl limpet population is in danger. Between 1990 and 1995, owl limpet numbers declined an overall 23%, and individual animals were found to average only 45mm in length (5.25mm less than they were 20 years ago). Park rangers sometimes discover people collecting illegally in the park, and are worried that this poaching may be causing the decline. The park has increased the presence of rangers and volunteers in the tidepools, and rangers take a strong stance on enforcing the “No Collecting” policies  in the park.

How many do you see? 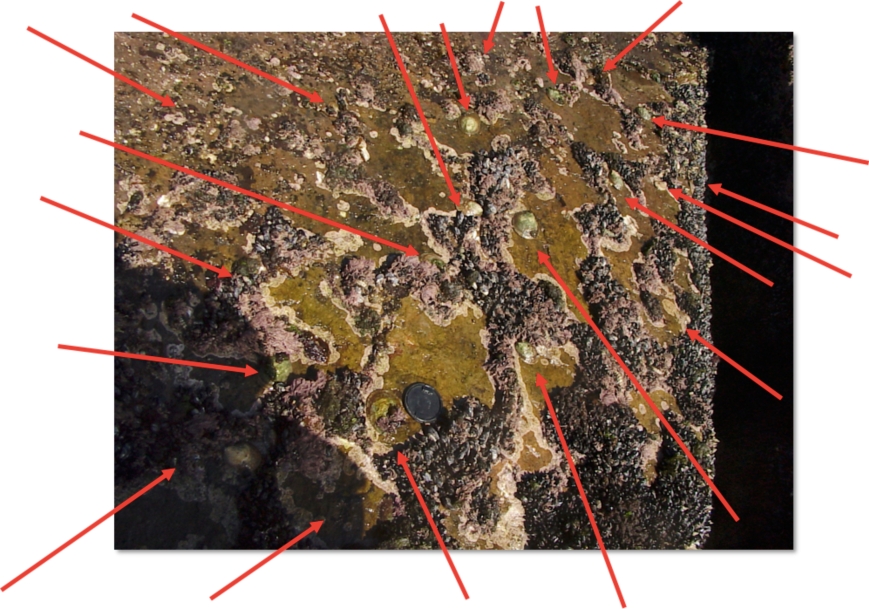 What are limpet gardens or limpet farms?

I have never heard of anyone calling them farms before, only gardens.  But the metaphor works well in both cases.  The larger Lottia, which are almost always female, keep an area of the rock free of other limpets.  They do this by just bulldozing them away.  Since all the larger limpets are territory holders, busy holding territories, they pretty much always face smaller limpets and can win the fight. Micro algae grows on the bare rocks and the territory holder is free to graze it in their “farm”, or territory, whenever they wish. A great strategy to eliminate competition for space and food, which are at a premium in the upper intertidal.

There are some pretty interesting experiments where scientists have erected little fences on the rocks in the upper intertidal to keep out all grazing limpets and snails.  Eventually the area inside the fences grows lush green algae.  The conclusion is that the grazers are constantly chowing down on the micro algae before it can grow very big.

The following photo shows some of the grazing tracks formed by the Owl limpets. 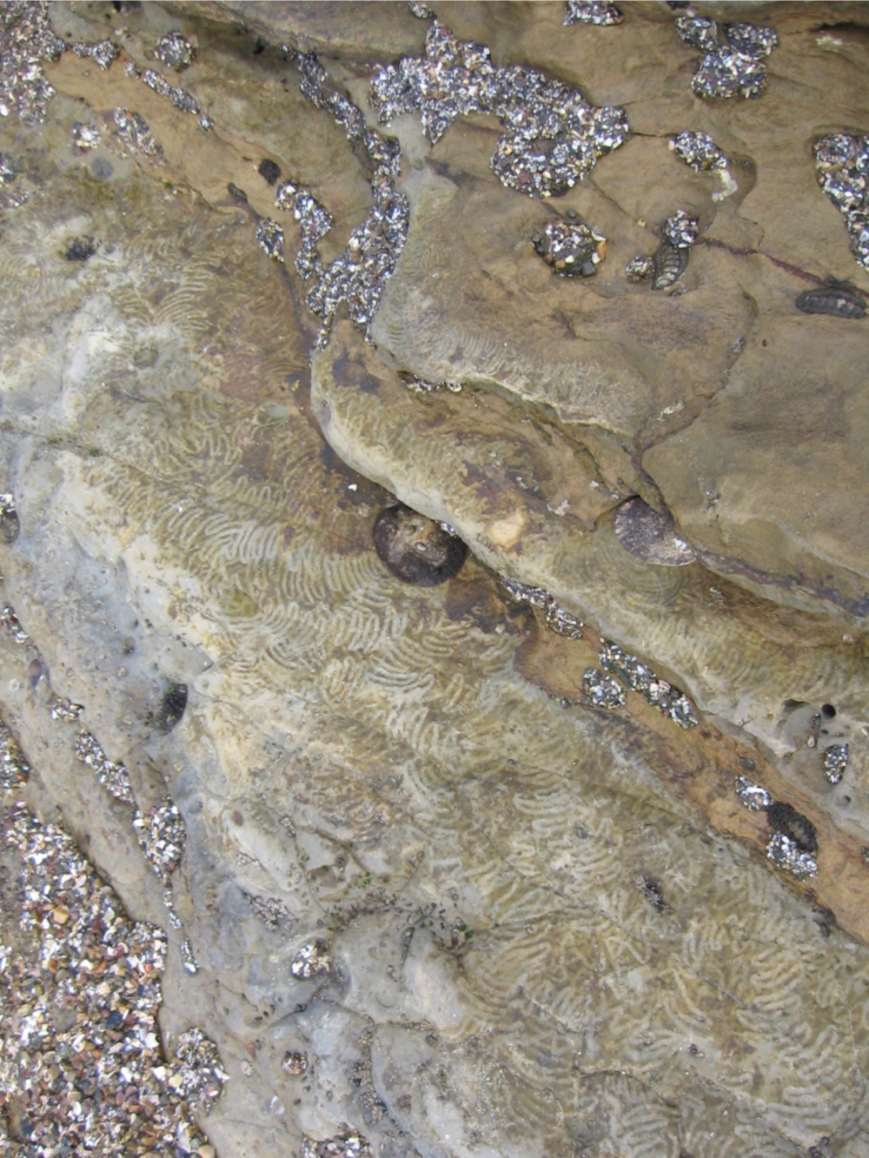