The rain in San Diego, comes with some observable effects to the coast and the tidepools. All the rain that hits the land will soak in as much as it can into the soils. Much of it will run off because it falls on pavements, or when the ground gets too soaked to absorb more or where the ground is too steep, as in the mountains. The runoff will seek its way down gradient through storm drains, small rills and gullies, mountain valleys and into streams and creeks (some of these “drainages” are dry most of the year) and eventually into rivers: the Tijuana River, the Sweetwater River, the San Diego River, the San Dieguito River, the San Luis Rey River, etc.

The water carries with it the sediment eroded by the water during its travels; everything from large cobbles and boulders to fine microscopic silt and clay (the mud)—and sand! This sediment laden water will travel to the coast and discharge into the sea. Some sediment may not make it during this storm, but a lot will and the rest will eventually get to the ocean via the next and the next and the next storm.

The next few days, after a significant rainfall, you should be able to see that the water just off the coast is a rich brownish green color; a soup of seawater and sediment. The waves along the shoreline will work that sediment—winnow it—and sort it out. The cobbles and boulders—the heavy stuff—will fall right out. The fine silt and clay won’t settle out and will be carried off by the ocean currents; eventually they will fall/settle  to the bottom where the waves are quiet and still, after a long transport. What stays behind? Well, that’s the middle size stuff: the sand! Sand grains are just big and heavy enough to fall out of relatively quiet waters to form our beaches. But they’re also light enough to be picked up by heavier waves, storm waves and be carried off shore. Sand, over an annual cycle, moves on shore and off. Heavier waves during the winter create our “winter beaches” which are the cobble beaches we’ve seen lately. Sand covered beaches are our “summer beaches” with lighter, non-storm waves that bring the sand back in from off shore bars. So,where does sand come from?  It comes from rivers!!!

In addition to seeing the brown water in the littoral (along-shore) current this “muddy water” time will affect the organisms in our tide pools. Watch the tide pools to see if they collect sediment or if there are different organisms. As you know from all the public service announcements you’ve probably heard, in addition to the sediment washed into the sea, the water will carry our pollutants. Stuff that’s gathered on the streets and in the dry washes. Oil, solvents, gasoline, diesel, soap and the other varied chemical broths that we use every day. Stuff that can be toxic, to us and other creatures and plants. See if you notice anything. Though the rain is a blessing, we need it, there are other effects.

Below are some rain runoff and high surf photos taken by Ranger Bonnie Phillips from a storm in March 2014. 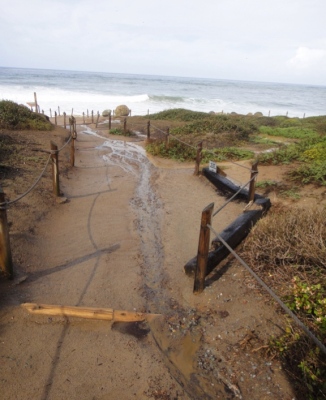 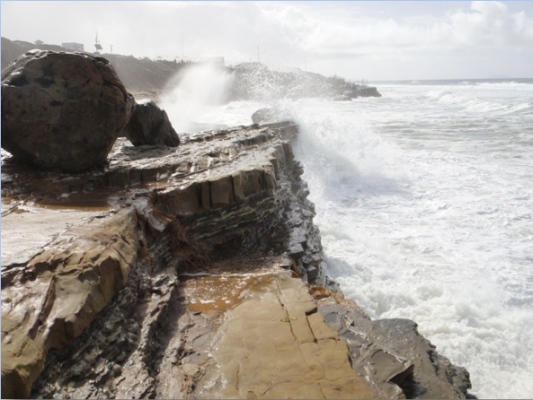 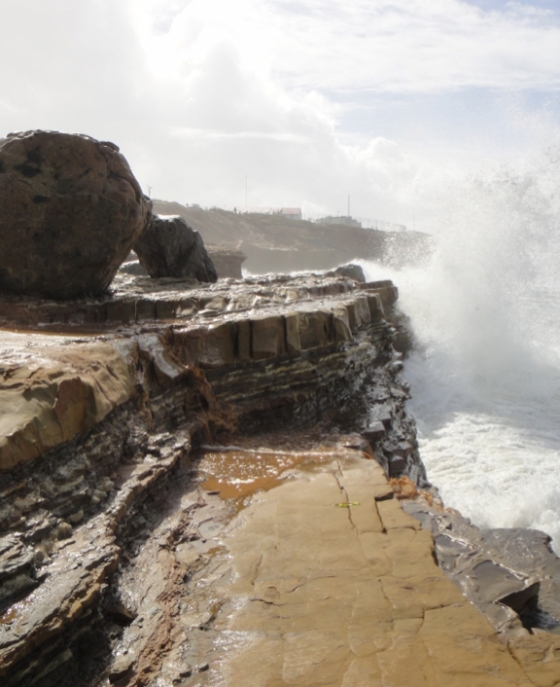