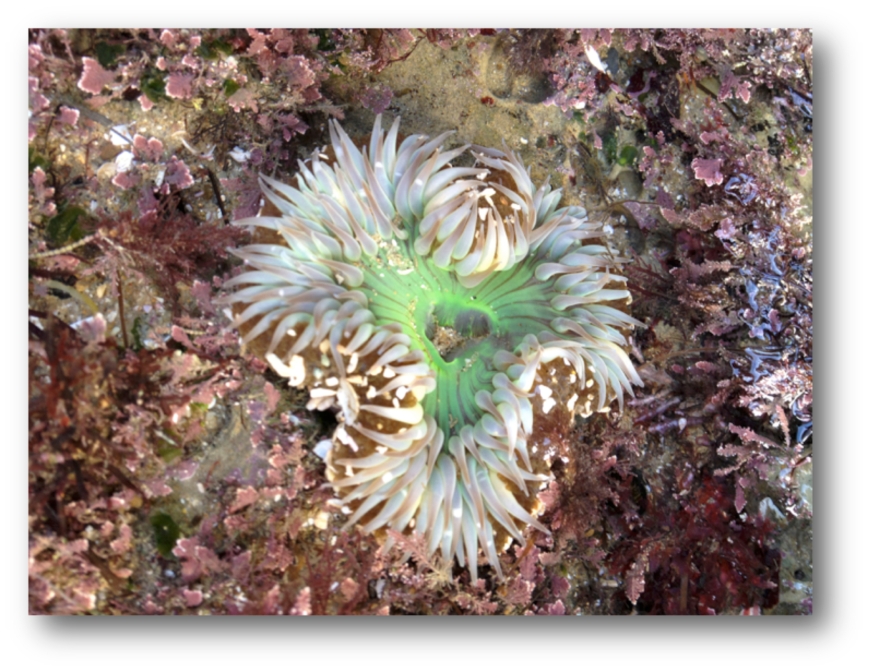 Where to find them: These invertebrates are typically 3 to 5 inches in diameter and are found in the rocky inter-tidal zone in tidepools reasonably protected from surf, and on protected surfaces and crevices in the middle to low tide zone.

Range is from central California to Baja California.

What do they eat: The mutualistic plant cells living in the anemone do not produce all the food needed by the anemone, and it feeds on living or dead organisms that become trapped in its flowery tentacles, which contain tiny stinging nematocysts that paralyze prey and give the anemone its green color. The stinging cells are too small to affect humans, and will only feel ‘sticky’ if touched.

Adaptations: Although sometimes seen protruding through the sand, they are always attached by their basal disc to a rocky substrate underneath. Although they can move slowly, they are usually attached to a rocky surface at one location and do not move.

The column of the anemone has numerous suctioning tubercles surrounding a gastro-vascular cavity, which are used to cover the anemone with pieces of shell and debris during low tide to prevent desiccation (drying out). Above the column short, conical filamentous tentacles spread outward from a central disc with a slit that is the mouth.

Coloration, which includes various shades of green to snow white, is due to the presence or absence of single cell plants that live in the tissues of the anemones and provide pigmentation. This mutualistic partnership provides the plants protection and carbon dioxide for photosynthesis, and oxygen and some food for the anemones as a result of photosynthesis. Anemones placed in dark locations will lose their plant cells and resulting green coloration.

Reproduction: A. sola reproduce sexually via external fertilization of sperm and eggs in the late fall. Newly formed pelagic, planktotrophic larvae float in the water until dispersing and settling in mussel beds.

What’s their life like: A. sola. opens its tentacles during the day, and when submerged, to allow sunlight to reach the plant cells living within it. When exposed to air during low tides, A. sola will appear quite differently; it will use its tubercles to cover itself with bits of shell and debris. As a mostly sessile (permanently attached) creature, A. sola has to patiently wait for living or dead prey to fall or swim into its stinging tentacles and become trapped.

Interesting facts: Although most people may view anemones as delicate, green flowers of the intertidal zone, anemones are actually colorless carnivores.

Waste is excreted back through the same slit that serves as the mouth.

Wikipedia: http://en.wikipedia.org/wiki/Anthopleura_xanthogrammica#cite_ref-bwhite_5-0 For reproduction and predator information. Other information available on prey but not included due to lack of additional references.

Discussion about the types of Solitary Anemones at Cabrillo – specifically does Cabriilo have any Anthopleura xanthogrammica or just Anthopleura sola?

In my opinion, there are no A. xanthogrammica at Cabrillo, or San Diego county, for that matter.  They are in colder more wave swept intertidal environments.  Such environments do exist further south in Mexico.  The area around La Bufadora gets more upwelling than San Diego does, and if you go there the species look more like what you might find in Santa Cruz than what you find in San Diego.  Including A. xanthogrammica.  I honestly can’t remember if I saw them there or not, but I do remember seeing lots of species there that I see further north, than I see in San Diego.  So it makes sense that someone could be seeing them or reporting them further south.  That doesn’t automatically mean they are found everywhere in between.  Believe it or not, Cabrillo is a pretty calm intertidal environment as the outer coast goes.  It’s not considered “exposed” within the context of the rest of the west coast.  And the water is definitely warmer.

Check out this google image search for xanthogrammica.

Now look at this one for sola.  (Note there are probably misidentifications on both these pages.)

Of course, there could be variation and it may be possible every once in awhile to see a solid sola and a striped xanthogrammica.  But not often enough for it to matter.  You could also find pale versions of both species (at their respective latitudes) in areas of very low light, like a cave (think Navy South).  These specimens don’t get enough light to feed their symbiotic zoochlorellae/zooxanthellae.

It’s also possible that you may stumble upon a xanthogrammica every once in awhile on Point Loma.  You also might see a Bald Eagle fly by sometime.  Maybe even land in a Torrey Pine to rest, before moving on.  I wouldn’t spend a lot of time waiting for it to happen, though.  And I wouldn’t recommend anyone study xanthogrammica at Cabrillo, unless they are trying to do genetics on the two species and think they might find both.  It’s difficult to rely on absolutes.  But when considering the ecological community at CABR in general, I feel comfortable saying xanthogrammica is not there.

Some of the confusion probably results from the fact that sola has only been separated out as it’s own species since 2000. So any reference book written before that will lump the two, and may list xanthogrammica as occurring in San Diego.  I would be surprised if that is what the Zedler surveys from the 1970s record them as.  The last version of Between Pacific Tides, the intertidal bible, is from 1985. On top of that, many people get their “intertidal training” from north of Point Conception, so they are used to seeing xanthogrammica and haven’t parsed out the difference. I bet this is frequently true of the grad students you may run across. Furthermore, most intertidal texts focus on central California or further north, where sola doesn’t live.  So they may not have it in their pages.  So poor sola suffers from a public relations deficit.  A. sola needs a superpac!

How did we historically come to this conclusion?  I think when I first started grad school in 2002 someone (probably Bonnie Becker) corrected me when I said it was xanthogrammica, because that is what I was used to seeing . . . further north.  If you look up the information on sola you’ll find it’s range is in the southern part of California, into Baja.  So we have the literature.  And then from my own experience looking at many many intertidal sites between Mexico and Alaska, I started to see the difference.  In taxonomy we call this gestalt. An ability to see the difference in shapes of two very similar species without being able to describe them precisely (although sola and xanthogrammica aren’t that close).  Birders do this all the time when a little brown job whizzes by and they identify it with both absolute certainty and accuracy.  But if you look at these organisms often enough then you can often perceive slight differences fairly accurately and consistently.  This can all be summed up as “my professional opinion.”  Which is by no means infallible, it’s just what I think and I am willing to base my reputation on it.  Someone could disagree with me reasonably, but I would probably not accept their argument unless I thought they were more credible than I am (or could prove it).  Certainly those people exist.