The Lighthouses of Cabrillo National Monument

(Our thanks to Kim Fahlen and Karen Scanlon for information included in this document, edited for content and space)

When visitors pass through the entrance gate to Cabrillo National Monument they are on the ‘monument’ that is Cabrillo National Monument, and in a national park. Although the Old Point Loma Lighthouse is now one of the main draws for visitors to CNM, its very existence was once questioned and it was neglected and threatened with demolition at different times in its history.

California had enjoyed statehood for just a year when the United States Coast Survey party traveled west in 1851. Its mission was to chart the Pacific Coast and also determine the sites for the first eight west coast lighthouses to be constructed by the U.S. government.

San Diego, at the southwest boundary of the U.S., was an obvious choice for a lighthouse. The tip of Point Loma, at 422 feet above sea level, offered what seemed to be the perfect spot for a lighthouse because the light could be seen from both the ocean side of Point Loma and the bay side.

Construction of the lighthouse began in 1854. Francis A. Gibbons and Francis X. Kelly were partners in the Baltimore firm ultimately hired for the job. They disliked the Point Loma location because it required them to build a road and bridges in order to haul materials to the site. Water for the mortar and plaster was brought in from a well in La Playa, about seven miles away.

Before the 1850s, most U.S. lighthouses used Argand lamps and parabolic reflectors. The lights didn’t cost much, but they also didn’t produce much light (and they used a lot of oil and needed constant tending). French physicist Augustin Fresnel created a lens apparatus in 1822 that changed the way lighthouses would be illuminated. The Fresnel lens is shaped like a glass bullet with many prisms and bulls’-eyes. When the light flashes, the light is concentrated into lots of individual beams that radiate out like spokes on a wheel. When the light is fixed, the light is uninterrupted like a big sheet. There are seven sizes, or orders, of Fresnel lenses: first (the largest), second, third, three-and-a-half, fourth, fifth, and sixth (the smallest). Records indicate that a first order lens was originally ordered for Point Loma, but a third order lens was eventually installed.

Point Loma Lighthouse was put into service on November 15, 1855. Its architectural style was of Cape Cod design, with a tower centered in the two-story dwelling. The roof was tin painted in red lead; the iron lantern was also red. Initial building contracts specified Argand lighting—for Point Loma, 12 oil lamps backed by 16-inch parabolic reflectors seated on a stationary, tiered frame. But just before completion, the Lighthouse Board adopted the Fresnel lenses.

In just under 36 years of operation, 11 principal keepers and 22 assistant keepers served at Point Loma Lighthouse. Low pay, isolation, distance from town, and water collection likely influenced the high turnover. The last keeper at the old lighthouse was Robert Israel. He stayed for 18 years and then transferred to the new Point Loma Lighthouse and stayed one more year. Through time, other structures were added around the old lighthouse, including a barn, a chicken-coop, a wood/oil shed (which had been altered to accommodate assistant keepers), additional cisterns and a catch basin.

Point Loma Lighthouse—acclaimed as the highest in the U.S.—had not been in service long before it was obvious that its elevation would be its undoing; too often its light was obscured by fog and low clouds. A new Point Loma Light Station was established at a lower elevation in March 1891. The old lighthouse was boarded up and abandoned. The outbuildings disappeared, and vandals broke into the lighthouse and took pieces of it away. In 1913 the commanding officer at Fort Rosecrans recommended the lighthouse be torn down. But because of the magnificent view from the tower, the lighthouse was still quite popular with tourists.

Meanwhile, there was a movement underway to build a memorial to explorer Juan Rodriguez Cabrillo. The Order of Panama (an organization dedicated to commemorating California’s Spanish heritage) wanted to build a 150-foot tall statue of Cabrillo. The statue was to replace the old lighthouse.

In October 1913 a presidential proclamation set aside the ½ acre of ground surrounding the lighthouse as Cabrillo National Monument. The proclamation cleared the way for the building of the statue. But for whatever reason, the Order of Panama never carried out its plans and the organization eventually dissolved.

The old lighthouse came to have several ‘lives’ through time, serving as a radio- and signal-tower, Army post-exchange, tea-house, visitor center, and who knows what else. A major ‘life-saving’ historic rehabilitation between 1933-1935 was given to the lighthouse when Cabrillo National Monument integrated with the National Park Service.

The original Fresnel lens was removed from the tower within a week of the old tower’s closing in 1891; likely, it was sent either to the San Francisco lighthouse depot or to the main depot in New York for use elsewhere. Its fate has yet to be discovered. At the time of the lighthouse’s centennial, a smaller fourth order lens with copper blanking panels was displayed in the tower and kept there for many years. Today the lens in the lantern is of the design of the original, a third order fixed lens manufactured by Henry-Lepaute. Only a small number of lenses installed in U.S. lighthouses were not French-made.

That the Old Point Loma Lighthouse continues to be visited and treasured by thousands of people is a wonder, and certainly, testament to decades of dedication by Cabrillo National Monument.

Although technically not part of Cabrillo National Monument, the Ballast Point Light Station was needed after the Old Point Loma Lighthouse was no longer operating. Stakes and lantern lights on poles had long been used to guide vessels through the ill-defined, narrow channel of mudflats to the port of San Diego. Just inside the bay entrance, Ballast Point jutted dangerously into the passage. Because of the relocation to a lower elevation of Point Loma Lighthouse, Ballast Point required more intensified lighting.

Ballast Point Light Station became operational on August 1, 1890. The lighthouse was a square tower attached to the clapboard Mission Revival-style house—assistant keepers resided there, while the principal keeper occupied a second dwelling beside it. For the first time in San Diego, a fog sound signal was established. Installed to warn shipping away from the Point, the big bell in its house was tolled by clockwork; the falling weights descended into a space in the ground and needed winding every hour.

A lens of the fifth order manufactured by Sautter & Lemmonier gave a fixed white light; kerosene and acetylene fueled the lamp before electricity. In 1920 the character was altered to broadcast a green light, given by a green glass shade placed around the lamp inside the lens. Cabrillo National Monument displays this original lens in its Assistant Keepers Quarters. In time, light station personnel maintained eight lighted buoys in the channel as well as the lighthouse.

Much is written about the men and their families who kept Ballast Point Light Station. It is a pity that the station buildings were razed in the early1960s. A modern beacon was installed on top of the lone-standing lighthouse tower for a time, but that became unstable, so the beacon was removed to a wooden ‘dolphin’ in shallow water—rather like a return to the stake light.

Keeper Robert Israel lighted the three wicks of the kerosene lamp in the new Point Loma Lighthouse on March 23, 1891. The iron skeleton-style tower stands on a concrete block 25 feet square and 14 feet deep. Two clapboard dwellings of Mission Revival-style, outhouses, two large water tanks, and an oil house completed the station until the barn from the old lighthouse was moved to the site.

Acquisition of a Fresnel lens was problematic, but ultimately one whose brass plaque read ‘ANCLOTE KEYS Florida Henry-Lepaute engineer 1887’ was installed. A ruby glass ‘screen’ was attached to every other of the 12 lens panels to give a flashing (by clockwork rotation) characteristic of alternating red and white flash every 20 seconds. In 1912 light intensity was increased by use of incandescent vapor oil, the ruby panels removed, and the character altered to one white flash every 15 seconds.

A compressed-air fog signal was added in 1913, its housing built at the foot of the tower. Since another attendant was required, a third dwelling was built. Electricity came to the station in 1928 but, being so “impractical”, was not used in the lighthouse until 1933. The fog siren was exchanged then for a two-tone diaphone.

The U.S. Lighthouse Service became the domain of the U.S. Coast Guard in 1939. In the years that followed, technology made way for lighthouse automation and stations became unmanned. With considerably less human upkeep, lighthouses have suffered. The 1891 Point Loma tower has been declared condemned.

By 1997 corrosion of the tower’s ironwork had overcome rotation of the lens and the floor was out of plumb. The central post—running the entire height of the lighthouse and normally attached to the floor—was separated from the floor ¼ inch. The U.S. Coast Guard determined that the only way to save the optic was to remove it from the lighthouse, which was accomplished by a specialist team in 2001. Today, a Vega rotating beacon mounted on the exterior lantern gallery sends the signal of one white flash every 15 seconds.

In 2005 Cabrillo National Monument opened the Assistant Keepers Quarters—a structure “rehabilitated” on the plan of the 1870s wood/oil shed that once housed assistant light keepers. Standing on the footprint of the original shed beside the old lighthouse, the Assistant Keepers Quarters displays an impressive collection of lighthouse-related artifacts. Rotating in the center is the Fresnel lens of the active Point Loma Light Station—many who have never seen (or thought about) a lighthouse lens, are incredulous as they come upon the beautiful optic. What perfect historic preservation!

Both of these lighthouse lenses are of the size called third order. Note the difference between a ‘fixed’ lens and a ‘flashing’ lens. Above, the lens in the lantern of Old Point Loma Lighthouse does not rotate; its beam is a broad sheet of light sent 360 degrees. The lens below is displayed in the Assistant Keepers Quarters (having been removed from the active Point Loma Light Station). As this lens rotates, its flash panels with bulls-eyes create what appear as flashes, beautiful spokes of light, when seen from a distance. 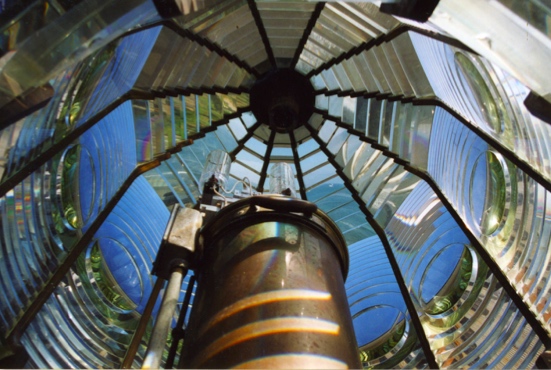 It is hard to realize that this light station existed on the end of Ballast Point, but lest it pass out of memory, its story stays at Cabrillo National Monument. The station was activated in 1890 and was razed in the early 1960s.

It appears an unadorned, businesslike station in this late 1890s image–no Torrey Pine to the left of where light-keeper Captain Israel stands. Furnishings in the lighthouse today represent the era of 1880-90s. Lantern windows in U.S. lighthouses were always covered during daylight hours.

Kim Fahlen and Karen Scanlon are world-renowned lighthouse experts. Cabrillo National Monument is fortunate to have them leading the volunteer efforts in support of our lighthouse. You can find their book in the CNM Visitors Center bookstore.