There are many short trails with fantastic views throughout Cabrillo National Monument (e.g. tidepool area, around the bunkers, whale lookout, and lighthouse) including the Bayside Trail. This trail is 2.5 miles (round-trip) with great views of the ocean, Ballast Point (where Cabrillo landed), downtown, Coronado Island, Tijuana, sandstone cliffs, ships, plant life, and, if the season is right, snow on the tops of the mountains.

The trail begins near the old lighthouse. There is a Bayside Trail sign, just before you reach the lighthouse, which directs you to the left and takes you down a paved road, and eventually leads you to the gravel/dirt path. The walk is a self-guided tour (with plenty of detailed signs that describe the sensitive vegetation, weather, habitat, animal life, etc.). It is also a historical site; a searchlight shelter and power plant built in 1919 and used during World Wars I and II still stand.

There are plenty of benches too, allowing you to rest, reflect, enjoy the views, write, or just take in the beautiful natural surroundings. If you have not been on this hike, it is worth the walk. Make sure you tell our visitors about this hidden adventure. 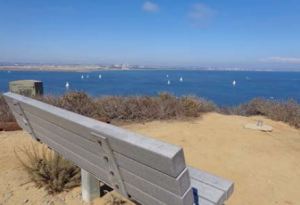 On the southeast side of the park, the trail follows an old military road winding down from the top of the park toward San Diego Bay. On a clear day you can see the mountains of Mexico to the south, the Laguna mountains to the east behind the San Diego skyline, North Island Naval Air Station, and the Coronado Bridge. The 2.5 mile roundtrip is easily done by kids and adults of all hiking abilities. But even though it’s relatively short, the uphill return gives a good workout with an approximately 340-foot elevation gain that could be challenging for hikers with respiratory or heart problems. Benches and stopping points provide perfect places to take in one of the most beautiful views in the county while you catch your breath. Hiking time is estimated at 1 to 2 hours, though you are likely to encounter many repeat local visitors using it as part of their weekly workout (think ½ hour round-trip). There are no restrooms or water along this trail, so hikers are asked to bring water with them, especially in the warm summer months. There is also no access to the beach at any point on the trail, and pets and bikes are not allowed. As in any natural area, there are environmental hazards to watch out for, including toxic plants and animals and fragile cliff faces. The downhill portion of the trail ends overlooking Ballast Point where nuclear-powered submarines are now docked in the same place Cabrillo’s ships anchored after three months at sea in 1542. Cabrillo’s statue looms on the bluff about 300 feet above you. You’re at the half-way point.

The natural environment along the trail is much the same as when Juan Rodriquez Cabrillo came ashore here in 1542. The trail is one of very few places in the world where Coastal Sage Scrub can live. Coastal sage habitat includes plants such as the fragrant black sage and sagebrush and is one of the most threatened habitat types in the world. The trail is also home to the Southern Maritime Chaparral, another vulnerable and precious habitat, inlcuding cliff spruge, dudleya and barrel cactus. Point Loma gets approximately 10 inches of rain a year.

Common plants along the Bayside Trail

Hundreds of different native plants and animals call the Coastal Sage Scrub their home. Many local birds, such as the California Quail, American Kestrel, and Morning Dove might be seen along the trail. The Point Loma peninsula is an important stopover for many birds that use the Pacific Flyway. In the spring, migratory birds such as hummingbirds, warblers, wrentits, and bushtits make their appearance. Cottontail rabbits, ground squirrels, lizards, snakes, and foxes might be seen along the trail. During the summer, please keep an eye out for rattlesnakes.

Common Birds and Animals along the Bayside Trail 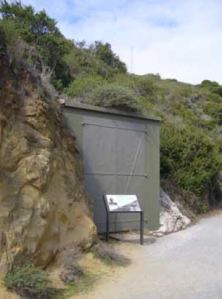 Wayside signs along the Bayside Trail highlight the importance of Point Loma and its strategic location in our military history. In 1852, the U.S. Government designated the area as a military reserve. The Army housed a portion of its intricate coastal defense system on Point Loma. During World Wars I and II cannons, mortars, and observation bunkers were constructed in a protective ring around the harbor. You’ll see a 1919 searchlight power station that was part of the system and housed huge searchlights that were used to light up the harbor entrance. The searchlight itself was housed a short way down the trail. When it was needed the soldiers wheeled it out on steel tracks, most of which have been removed. From there it could sweep the harbor entrance and illuminate approaching ships and aircraft. From the tip of Zuniga Jetty, which you can see stretching from North Island southward toward the ocean, a submarine net anchored to Point Loma could be raised to prevent the entry of enemy underwater craft. You’ll also see modern day military defense installations. At the end of the trail is a view of Ballast Point, home to nuclear-powered submarines. Across the bay you can see North Island Naval Air Station.